The End of a Month

Well as things stand poised on spirits of the dead communing with the spirits of the living, I have to say have a Happy Halloween this year.  Corpse Cop is standing proudly at the Goodfoot this next month as the "I am, therefore I think 5" show get under way.
GALLERY SHOWS:
Now unfortunately none of my pieces sold for the 88 STRONG SHOW. BUT I should know that painting is not my strong suit. It never was but I gave it the try because what  else did I have to loose?
Nothing.
I realized that at that moment that art is reactionary.  I have a lot of artists friends of mine that know the hard work that goes into making the pieces but its the complete stranger that has the bucks to really appreciate what you made that really makes the difference.
If artists could afford each other's art we, as a group, would be very happy and very well off.
Aside from that, I know the work is good.  I guess it's just looking for that right buyer.
But onto more shows.  As the 88 STRONG show came down another show replaced it at the Goodfoot Lounge.  The new show is entitled "I am, therefore I think 5".  Now where the title comes from?  I do not know but I am sure to find out down the road.  I have two pieces from two vastly different shows because to me their impact is part of that social commentary on life.
THE CROSSOVER:
The book continues on but slowly and not for the lack of trying.  I thought I was being very premature with thinking I could have the basic drawings done and ink but no such luck.  Bare in mind I was being completely unrealistic with my goal.
With a new bill paying job and working six days a week makes it for a very small window to get things done.  BUT they will be done.

Now one of the latest commissions that I was contracted to work on was "the Pencil Trick"  featuring the Joker.  Now I was told that I had pretty much free reign on this so keep in the trick I decided to pull as much info off the Heath Ledger version from "The Dark Knight".  It seemed like the best thing to do.  So here was a rough idea of what I was thinking about doing.

A Relaunch ...of sorts


Well there sports fans, Al here with the latest.
Due a massive hacking job done to my personal email address I had to set up a new (and possibly a improved) blog for both Black Box Comix and Tales From the Scratch Pad.
T.F.t.S.P is due in part to the massive amount of effort and turn out of scratchboard art over this last year.  I am impressed with the results of what has been a very challenging year for me but continues to keep getting better and better.
But to cut to the chase I have to apologize for the change up.  This was not the way I wanted things to go down.  But comics continue as does the art for gallery work as well.
As this next month begins to show up so do more ideas for art work and stories!  And we are no different that anybody.  Darkslinger Comics will be making a come back and with a vengeance.  Corpse Cop will be part of that rebirth which I am looking forward to.  It won’t effect the current situation with the crossover as well.  Or any other property that Black Box Comix currently owns.  And this is a good thing for there are several projects that are flagged and  awaiting a green light .
GALLERY WORK:
At this time The current "88 STRONG" will be coming to an end and with a few pieces already being sold.  This is always a good indicator that I continue to keep painting, it will continue to keep getting better and better.  But out of the blue I had been invited to join another show this upcoming month at the Goodfoot Lounge called "I am, therefor I think 5" show.  This was a show to kind of let the artists hair down if you will or had any hair mind you.
I have to pieces that are going up "Trust Me" AND "Fill in the Blanks".  Now some folkes are gonna ask why these two?  What kind of social commentary could these be in reference to?
Pretty easy to say "Trust Me" for is the relationship factor kicking in.  Who's bed are you being lead too.  Both beautiful heavenly and diabolic.  I know I going to get some crap about that but hey I got reaction right?
"Fill in the Blanks"  right?  What's not to love about Corpse Cop.  With all the zombies and forthcoming apocalypse why not put him up there.  There has been in the media so many zombies that you could think one more to what's new?  Free thinking zombie with mini chain gun that's what's new!
And then as that show comes to an end of November the People's Art of Portland will have a big blow out for The BIG 200 art show.  For this kid, I have my pieces already completed.  But once this show is done the work isn't over yet. 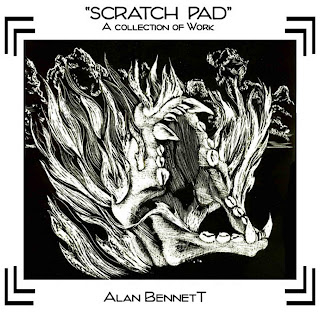 A collection of last years five pieces in the BIG 100 show have been complied along with this years BIG 200 show and a selected smattering of independent scratchboard into a 24 page booklet.  Aptly titled "Scratch Pad- A Collection of Work" by your truly, Alan Bennett.
And that is it for the kid 'cause I've got work at a new job- the Art Store.
Posted by Tales From the Scratch Pad at 6:48 AM No comments: