Hey there sports fans, been a while and there has been a lot of things that have come up in the last month or so concerning shows both of the comic book variety and gallery.
But I'll review the latest first ECON 2016! 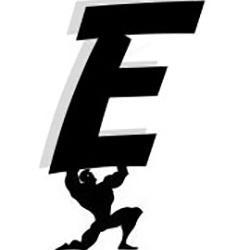 After a small amount of prodding from my friend George I will hopefully give you that which you deserve the pro and cons.
THIS WAS THE 2ND annual comic book show for the EUCON. And expectations were high for a repeat of last year.
The attendance of last year was three times the amount that was expected. That alone was great and it did translate into great sales.
There was no real complaint there as far as I was concerned, other than would people remember who I was and was coming back home to conquer like a Viking coming into a small township.
I did better than I expected there and was crowning achievement of my personal best.
But this was a different show with an extra day and pitted against a University of Oregon game that was scheduled towards the end of the show
Well I can tell you that and more. 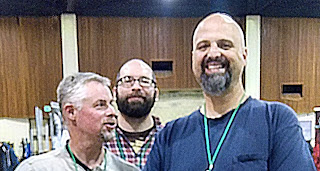 1). BOOTH PARTNERS.
I have tabled with several different people over the years. And a vast variety of different personalities. All of them have been fairly positive and enlightening with insight to each individual. An this is no different. I have tabled with both Dan and George separately.
As compared to last year I always look at my table mates as someone I care about and have a great time with. This time round I would say that having George Leon and Dan DePaolo as wing men was pretty darn cool.
So thanks guys for paling around with me.

2). TRAVEL.
I will include travel from the show in this category. Travel went off without a hitch. It was sunny most of the way but there was a fair amount of fog as well. For this time of the year in the Willamette Valley this is actually not that uncommon. We made it there pretty damn quick and began the unloading process for set up.
The travel from was about as quick. Only exception was rain on the way back just as we left Eugene.

3). LOAD IN and SET UP
The thing about shows is the load in and set up. And after about 18 years of shows, we had this down in spades! I think it took us more time to park and check in where our tables were at than the actual set up. 20 mins in and out! 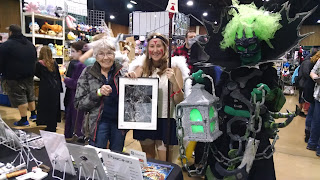 Now I have had a number of customers and I even had returning customers coming back and buying things from me. So that was exciting for me to see returning people who remembered me from the show last year and handing credit cards to be swapped for art and comic books.
It was nice to see that there was a number of products selling from table from everything from prints to postcards to comics to original art work!
I have had some good conversations with people who didn’t buy anything because cash was (and always is) in short supply.
I was able to explain the process of working on scratchboard and how I was able to incorporate digital medium to add color to the per-existing art. One of the best times was talking to a young woman who had already been working in the medium but was curious about the technique of getting the soft line work. When I told her about the extra fine steel for making fog, clouds, smoke wool and using flat matte ink that I use for my brush pens for correcting mistakes and the use of gloss varnish to even out any problems.
The other was from the sale of of an original piece of art work that I had just included at the last moment to have on my table to show off what an original work could look like framed and matted.
This was a teacher whom had started talking to me and wanting to know about my process and using a medium that not a lot of people use. Judith (that is her name) was kind and asked for my business card then a short period came back and said “I’d like to to buy that piece.” 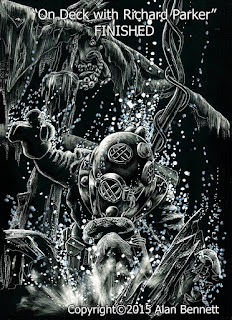 At first I was completely dumbfounded. “Whaaa, sure.” I never expected that the Richard Parker Piece was gonna sell. I was excited that another piece of work was leaving home. I may not have sold during it’s first run but it definitely had more to give at this show. I had already sold enough to make a good dent in the amount to cover the table cost the day before with the sales from prints and comic books – particular Corpse Cop “Inhuman Torch”.
It was a decent enough sale that both George and Dan both looked at me like what did you just do Bennett? Big sale, now I know who to hit for drinks later.
This was a sale that blew open for me the rest of the day I had a sold other items directly after. It was a lot of fun.
BUT the most amazing part of this whole story was the fact that Judith had her two daughters bring back a tool for helping me along cutting the scratchboard a fine tip retractable x-acto pen knife. So cool. It spurred me to start using right away another piece with the Creature from the Black Lagoon. 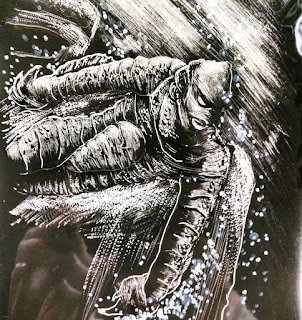 So a big thank you goes out to Judith!
So with that we now come to the parts of the show that didn’t do so well. THE CONS of EUCON. Now mind you this time around I didn’t have an issue with the organizers of this show and they are my friends on top of that so but there are nit picky things that should be addressed for future shows.

1). CUSTOMERS.
I have mentioned in the past of the Booth Barnacle. Actually this came very early on like the first of the show for me. This guy came up and had started off with talking about looking for an artist to work on his stories. And though he had bought the very first print of the show. And I was thankful for that but dude move on. Shove, bounce do something else other than mumble at me about the plethora of stories ideas. Come up with a good concise pitch AND can you pay the artist that agrees to you and what you are talking about?
There were two other instances that caused some issues. The Boy who Cried “Free Stuff”. This was a young kid who was running around the show floor hitting up artist’s alley vendors for free swag.
Hey kid here is something free for ya- advice. Knock it off! Here is a free rubber band as George said. The thing about the kid was that came back the next day and did same damn thing. And asked, “I don’t know if I asked you this before but do you have any free stuff?”
The last one was the customers who kept taking photos of our work. Particularly George’s work was being targeted cell shots. Ask before taking a shot or some tables are gonna get flipped.

2). FAN ART VENDORS.
I think that this was biggest disservice to Artist Alley was having vendors selling a Sheeeetonn of fan art that they didn’t even make! There were I think three different vendors there in their booth set ups that were selling not only fan art but other comic related products as well. I know for a fact that there is no way in hell that you guy with the flimsy 15 ft tall PVC pipe tower of shame you made that! If you are gonna be in the artist alley be honest represent your self right. It almost make me think of the bait and switch routine.
The other issue that I have other than these guys aren’t being honest is the fact that these towers nearly fell down on top of a bunch of people because accidentally bumped it!
Hey if I wanted to watch the leaning towers of crap work fall go to freakin’ FANCON 20 whateverthe”F”!

3). P.A.
I understand about that you need to have one of these for dealing with lost and found kid’s/adults OR some safety issue at the event but I was kinda a little tired of hearing about “Give me your best Chewbacca imitation”. I think I had heard a continuous run of these contests over the PA for three days. Common dude give it a rest.
I just wanta listen to the music that was being pumped in. SOOOO much better than George Thorogood and the Destroyers “Bad to the Bone” like what George and I were subjected to at Crypticon!

4). COSPLAYERS.
Now I am certain if you have gone to any of these shows you are going to see cosplayers doing their thing and walking through the alley ways between tables showing off their creative intentions to like minded folkes. Super cool but go do it someplace other than in front of my table.
These young cosplayers get a walk because they don’t know show ediquite please, please , please don’t take photos in front of my booth/table. I’m trying to sell my work here.

So here is the question would I go back?
Yes I would. It was a fun to head home and see old friends and sell artwork.
With only a few modifications EUCON could be a great big small show. I know that this shows had things working against such as the previous elections and of course dealing with ever present changing time schedule when things were supposed to happen


Time for this kid to check out
And as always there are places for you to check out as well.Etsy 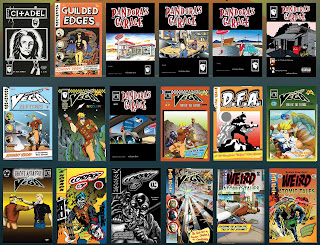 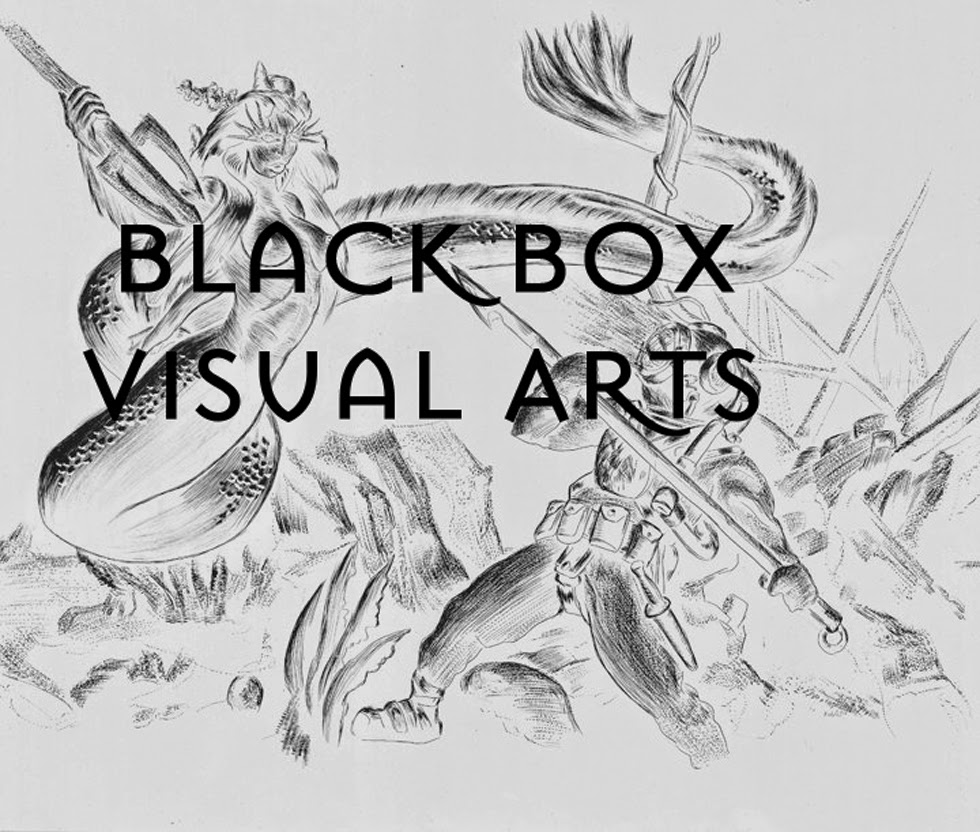 
I am outta of here.

Posted by Tales From the Scratch Pad at 5:05 PM No comments: