A Bit of a Breather

A NEW SHOW FOR THE END OF APRIL.

The drawback is I have no name for it yet but I will make a poster for it.
Well as it turns out the art revolving show that has been my fortune to have created has been getting better and better regardless of size of the venue that I have been asked to participate in.
With the contacts that I have been fostering this is a big deal for me.  If it works out well, I may have more shows to come.
So after talking to the curator Vicki of restaurant/ lounge My Brother's Crawfish it looks as if the show would go up April with for about 1 month before coming down.
This of course is just as I get ready to head down (or more likely up to)  Seattle for the Crypticon.
If I can get the last of Corpse Cop" Inhuman Torch" edited by Paula, I could have two new books out as well as prints and postcards for that show.
That's a lot of merch for a show.

As Black Box Visual Arts begins to move forward so does the investment of new tools for the trade.  One of the first is a wand scanner.
This little guy will now allow bigger works such as the 16"x20" scratchboards to be scanned in and saved onto a thumbdrive to transport digital imagery to print shops and have actual prints made of the work rather than always relying on original work to sell.
This is, in one way, way that a lot of artist I believe make money off the inexpensive prints rather than selling original artwork.
Both large size at art shows and smaller prints of the large work at small scale like 9"x12"  at trade shows.
I'm already beginning to compose a list of large scale images to be made and figure out the cost for the small scale images.
As an example if a 11"x17" sell for $10.00 then a 9"x12" should go for about 8 bucks cheep.
Of course everything is dependant on the quantity of what is ordered from the print shop.
That always goes the same way when you are ordering a quantity of comics being made to and not using a traditional printer.
I will in the next week be checking out what needs to be done with the printer and the thumbdrive.
DREAMS OF ELYSIUM NEWS: 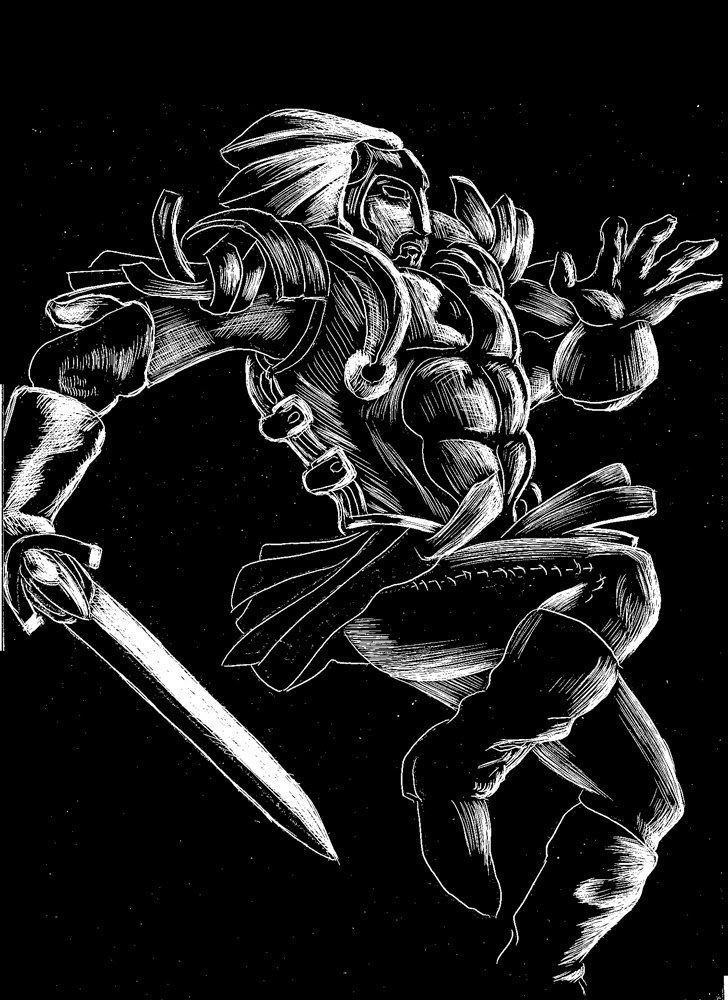 A needed break between Corpse Cop books is this little gem.  Now like I have said this is kinda my swan song with comics.  Corpse Cop will always have a place for me as work on New stories (just like Vega and Corrax) but the need to crank out the work won't be as prevalent as it has in the past.
There are at least four other Corpse Cop stories I want to do personally then release a completation and then onto The one and only graphic novel for international consumption.
There are several different versions of the book I want to do.  Both and a couple in English.
The thumbnails for the story look nearly as good as any of the Corpse Cop stories that has come up so far and this doesn't include the mother of all cross overs in the Vega Universe- the Vega Initiative.
The good news is that this work is laying all the ground work for the scratchboard that is come.

Well here I thought that I was gonna get a breather here but I guess not with the shows.  I decided to go ahead and enter into this show and crank out 8 new pieces of work - and all painted.  Man, it's been a bitch to do so but I will make it happen. 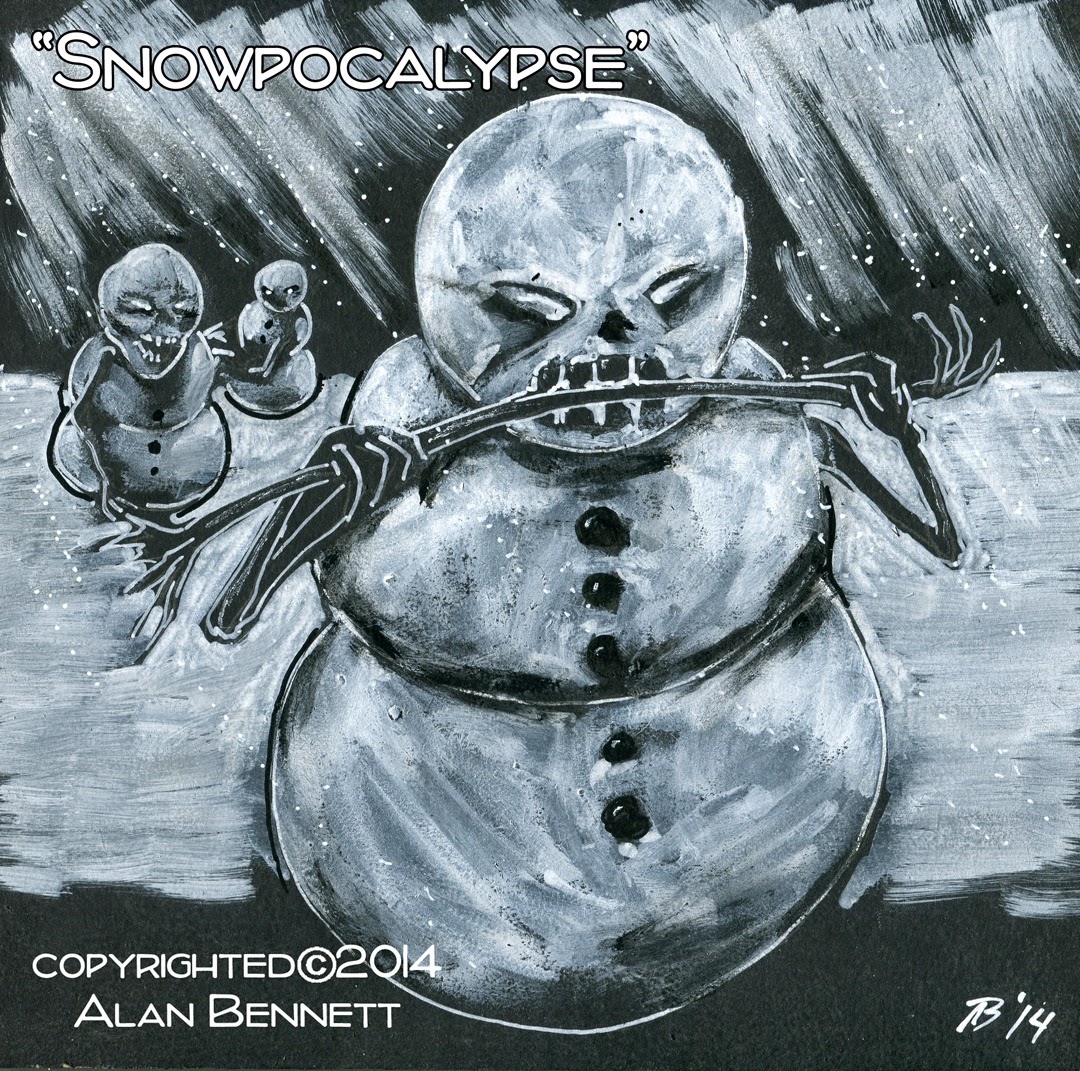 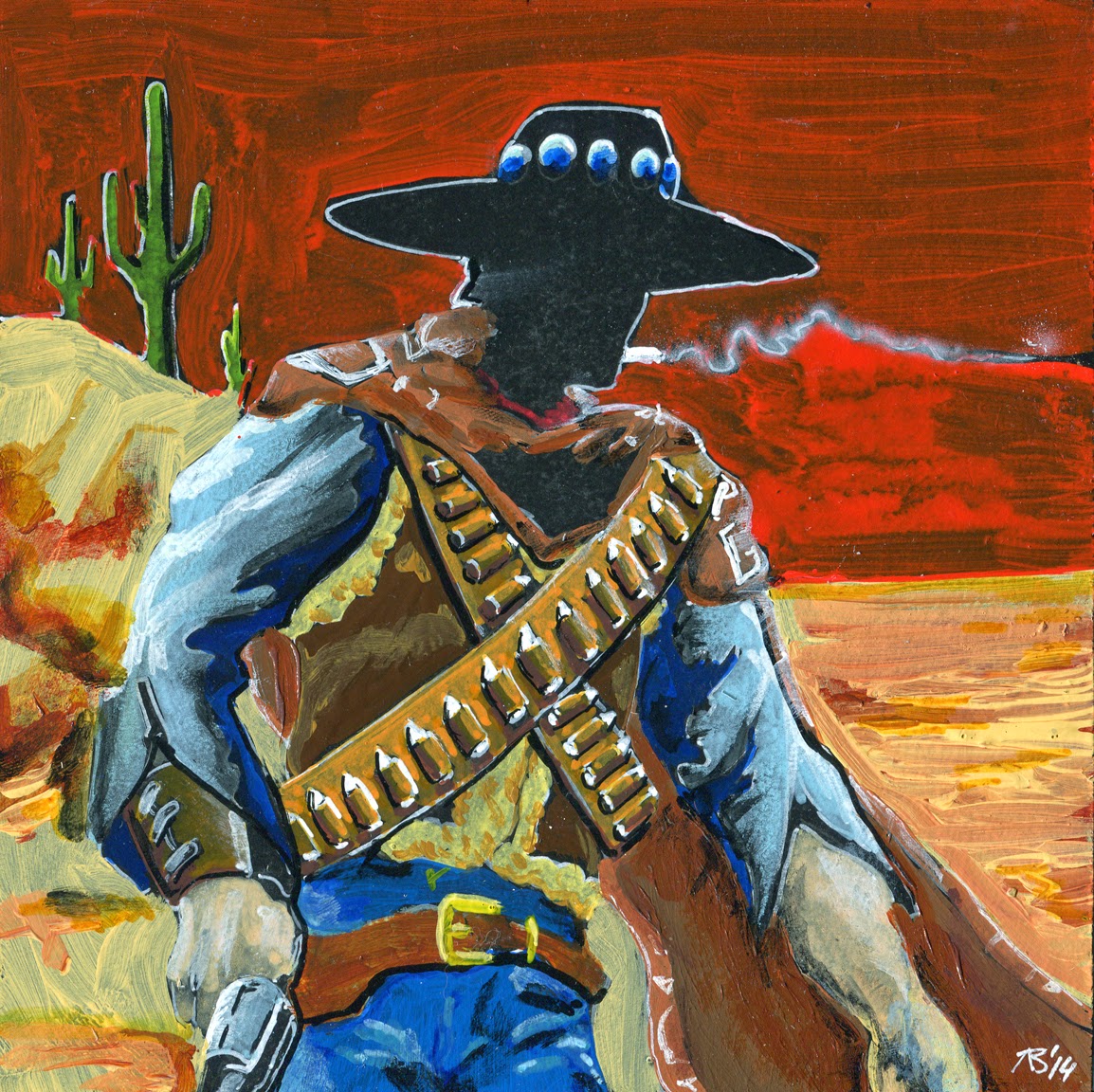 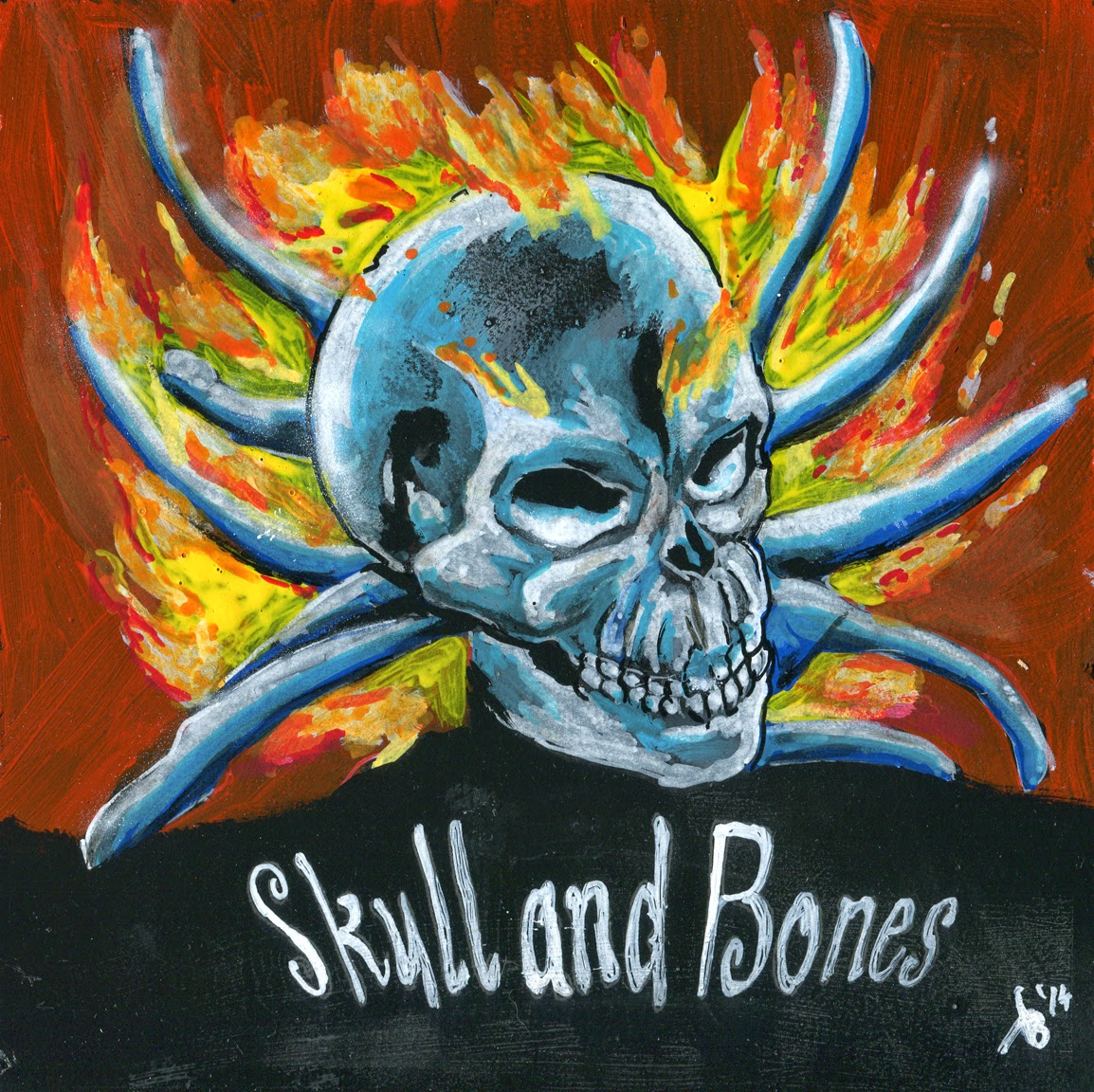 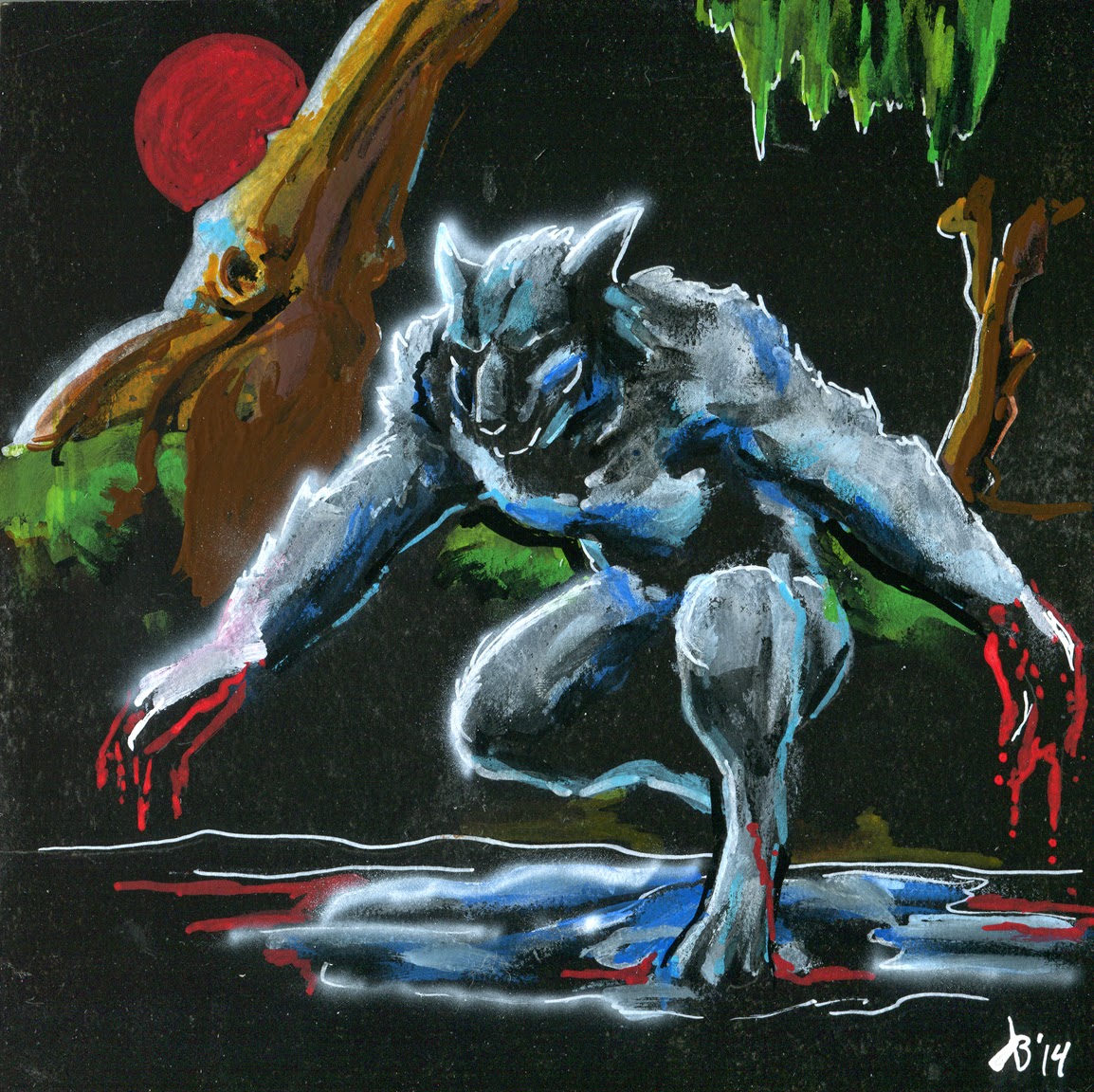 I guess my biggest beef right now is the change in the way people collect and buy comics these days.  So mind you this is just an observation of a medium I have loved since I was a kid.
The digital downloads like comixology or comicsdrivethru.com or any of the other type of digital downloading seems to be taken over by professionals from the big companies with a great editor and so on.
So where does the little guy fit into all this?
Out in the Circle K parking lot with Bill and Ted is where.
And that really bugs me.
I always thought that this kinda on line community was to help us little guys?  I guess I was wrong way wrong about that.  Big companies exploiting another way of getting work out there and squeezing the rest of us out.
Makes me crazy thinking that the only way to make books happen is if I seriously invest myself to a group of people that I might as well shoot myself in the head.
But I ain't gonna do that.  Well we'll see how the projects I got going on are gonna turn out.

The kids outta of here.

Posted by Tales From the Scratch Pad at 8:34 AM No comments: